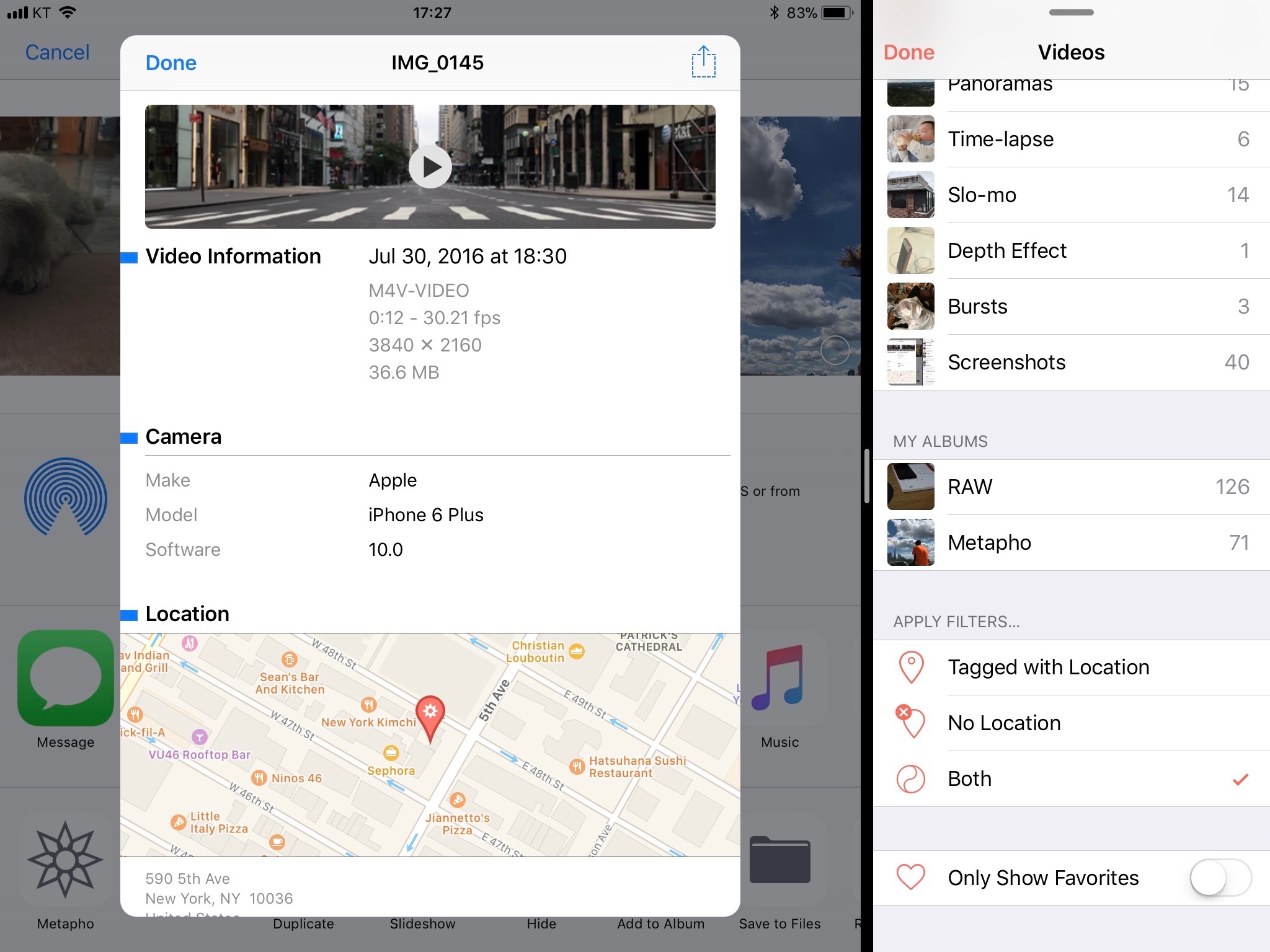 Since the beginning of Metapho, Video support is the most requested feature. This summer, I finally made the app could read and write video metadata, in a similar way photo metadata handled. Date / Location Edit, Safe Share, Batch Editing… all works with videos now.

From iOS Share Sheet, You can activate the Action extension with multiple items selected. Select photos and videos as many as you want in Photos, open Metapho Action, swipe side by side to navigate. For Live Photos, Action extension also plays short live photo preview, and 3D touch for play works, too.

3.0 adds My Album and Smart Album support. And there are location and favorite filters, too. I’ve merged albums and filters together, so that each album could be filtered by location or favorite filter.

The app performance is finely tuned for faster, smoother, and more responsive experience. It shows locally available information first when download from iCloud Photos Library is in progress. For a long running operation, the app reports more accurate progress.

A third party app which edits a photo in the Photos Library, has to normalize image orientation to 1 for in–place save. This means, even for a simple metadata editing, the app must render and compress the photo as a new jpg again. Metapho used to apply a moderate compression rate for re–rendering, which leads to reduced file size for some large photos with low rate. Metapho 3.0 does not re–render the photos that already have normal orientation, and uses higher compression rate for non-1 oriented images. Since JPEG to JPEG is lossy conversion, I think this is right way to do compress under current OS constraints although this causes not–so–ideal storage usage. For Safe Share, the constraints above does not apply, so Metapho just replaces metadata part of the JPEG file, writes it to the temporary space, then shares the file.

When the Metapho 1.0 was released, iOS 8’s app extension was still in the very early stage, so there was confusion among devs — and App Store review team also — where to put what extensions. Out of that chaos, Metapho started with Edit extension only, but quickly added Action extension. Edit extension is not an ideal place for Metapho because Photo Edit extension point does not allow third party apps to change the photo asset’s metadata in Photos Library database. There has been ugly and unreliable workaround for this limitation. To sort things out, Metapho 3.0 removes Edit extension. To edit metadata, use Open in Metapho button in the Action extension. Metapho can do much better job changing Date / Location data than Edit extension.